Beyond the Voting Rights Act

Moore, one of the leading advocates of the 1993 “Motor Voter law,” explains how fighting voting suppression laws is vital to the future of our democracy
Aug. 6, 2022
Washington, DC — Since our nation’s founding, the right to vote for people of color has been restricted due to federal, state and local laws that were initially designed to only allow white landowners and those in positions of power the right to vote. The Voting Rights Act, signed into law on August 6, 1965, was designed to remedy that, prohibiting any state or local government from imposing any restrictions on voting that would deny someone the right to vote based on their race, color or language group.

Yet, for decades since, Republican lawmakers and the U.S. Supreme Court have continued to chip away at the Voting Rights Act. State legislatures have continuously used gerrymandering to maintain their political power and as a way of restricting how many minorities are represented in certain districts. In recent years, they have also implemented laws rolling back earlier reforms expanding voting by mail and early voting, imposed strict photo ID requirements to vote and more.

And in the wake of the 2020 election, Georgia, Texas and many other states have passed even more restrictive voter registration laws, making it even harder for people of color to vote. Even northern states like Ohio have waged fierce political battles to undermine citizens’ led redistricting reforms.
In his new book, Beyond the Voting Rights Act: The untold story of the struggle to reform America’s voter registration laws, (DeGruyter, September 2022) author Gregory T. Moore chronicles the battles that voting rights activists have fought over the last 30 years, from the 1980s to today, to dismantle voter suppression laws throughout the country. Moore explains how increasing access to voting and mobilizing people of color to vote can not only tip the balance in many elections, but also ensure the future of our democracy.

Moore is considered one of the nation’s leading voting rights advocates. For the past 30 years, Moore has held several key roles in Washington, including serving as the executive director of the NAACP-National Voter Fund, coordinating national programs promoting voting rights and registering more than 500,000 voters nationwide throughout his career. Previously, he served as legislative director and chief of staff for Congressman John Conyers, where he helped steer the final passage of the National Voter Registration Act of 1993 (The “Motor Voter” Act).  Moore also led the effort that established the first 50-state election protection program for the Democratic National Committee and state parties throughout the U.S.

In the book, Moore tells the story of the fight against voter suppression from his own perspective, beginning as a young, African American man from Cleveland in the 1980s who reluctantly became involved with this movement as a student activist and inadvertently rose to become an integral part of legislative history.

The book covers the previously under-reported period of voting rights advocacy in the 1980s and early 1990s, providing historical context to the struggle for democracy, including Jesse Jackson’s historic campaigns in 1984 and 1988 and the passage of the Motor Voter bill, which allowed people to register to vote and update their address at state driver’s license facilities. It also addresses the more recent push to restrict voting rights, from the Supreme Court’s Shelby decision in 2013, which allowed more states to impose new voting restrictions that helped facilitate the rise of President Trump.
​
The book has already received praise from many prominent leaders, including Donna Brazile, who served as the campaign manager for the Gore campaign in 2000. “Greg Moore has written a compelling book, which takes us on the journey from access to the ballot box to fighting voter suppression,” she says. “Moore reveals, in this first-hand account, the behind-the-scenes struggle to secure the vote for every citizen. No book is more important to forging our future.”

Clarence Lusane, author, activist, scholar and noted political science professor at Howard University says, “As this generation wages its own battles against a tsunami of voter suppression legislation and an insurgent authoritarian movement, Moore’s insights, experiences, leadership, and guidance is more urgent than ever. Any and everyone concerned about the democratic future of the United States needs this book.”

To schedule an interview with Moore, please contact Lauren Carrane at 954-554-0336 or lauren@sharppencilmarketing.com.​
Proceeds from this book will be donated to the Promise of Democracy Foundation.

Click one of the links below to purchase the book
Amazon 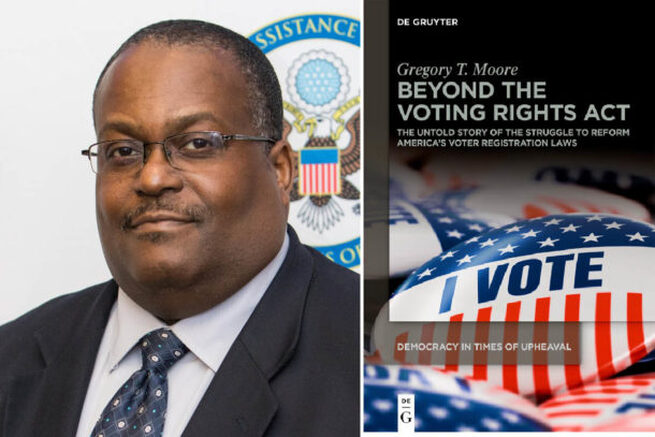