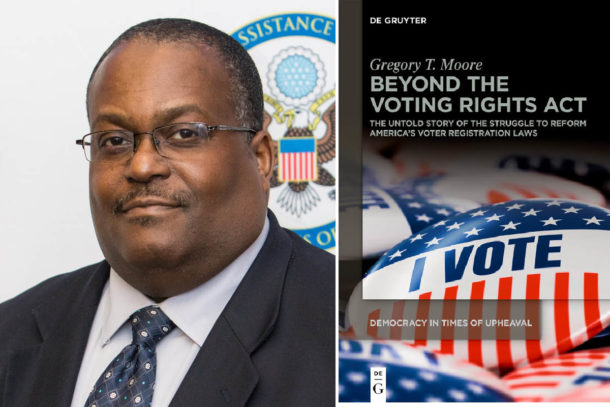 Greg Moore, left, and his new book, "Beyond the Voting Rights Act." Images courtesy of Greg Moore
The Vermont Conversation with David Goodman is a VTDigger podcast that features in-depth interviews on local and national issues with politicians, activists, artists, changemakers and citizens who are making a difference. Listen below, and subscribe on Apple Podcasts, Google Podcasts or Spotify to hear more.
​American democracy may rise or fall on whether or not citizens succeed in preserving the right to vote. The battle to save voting rights has reached a critical phase.

The new voting restrictions threaten to roll back the rights that were secured in the 1965 Voting Rights Act, which was signed into law by then-President Lyndon Johnson. The current tsunami of voter suppression laws was triggered in 2013 when the Supreme Court handed down the decision known as Shelby County v. Holder, which “put a dagger into the heart of the Voting Rights Act,” in the words of the late Rep. John Lewis. Shelby has been used to roll back key rights enshrined in the Voting Rights Act, and the result has been a wave of voter suppression laws targeting communities of color.

Greg Moore has been a key participant in the battle for voting rights. He was the executive director of the NAACP National Voter Fund, coordinating national programs promoting voting rights and registering more than a half million voters nationwide throughout his career. He previously served as legislative director and chief of staff for Rep. John Conyers, where he helped steer the final passage of the “Motor Voter Act” of 1993. He is the CEO of the Promise of Democracy Foundation, a nonprofit organization focused on protecting democracy, voting rights and civic education. His new book is “Beyond the Voting Rights Act: The Untold Story of the Struggle to Reform America’s Voter Registration Laws.”

Moore argues that because of the Voting Rights Act, “voter registration rolls swelled up all over the country … and it led to a massive turnout that elected the first African American president not once, but twice, in 2008 and again in 2012.”

That sparked a furious effort by Republicans to suppress Black votes.

“The Trump MAGA movement has accelerated that whole process,” Moore told the Vermont Conversation. “The emergence of the Black vote and the youth vote and low income vote created such a powerful force in 2008 and 2012 that it forced the retrenchment from this longstanding law that was 50 years strong.”
​
Moore contends that federal action is essential to defend voting rights.
“If you take away the federal government's ability to provide that undergirding support for these rights, then you leave it to states to do whatever they want … It's just like the issue of abortion: There'll be states where you can have it, and states where you can’t, states where you have the right to vote, and states where you don't have the freedom to vote.”
​
“Jim Crow was what happened when there weren't federal guidelines,” Moore added. “If you take away federal guidelines, you return back to that. … Congress needs to put forth a bill that can pass on a bipartisan basis and be enacted in the law.